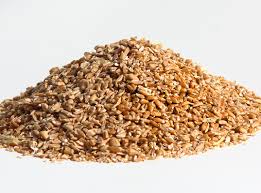 Feed wheat is a major staple food that provides about 20% of food energy and protein worldwide. Wheat is also an excellent energy source for farm animals: in 2007, 102 million tons (16.7% of worldwide production) were used to feed animals. This proportion is higher in industrialised countries: in the EU-27 in 2007, 42% of wheat production was used as feed. Feed wheat is often surplus to human requirements or low-quality wheat unsuitable for human consumption (low test weight or damaged wheat), but wheat is also grown specifically for feed purposes. The inclusion of wheat grain in feeds depends on the relative market prices of the major feed grains. When maize, barley and sorghum are expensive, or when wheat prices are depressed, wheat becomes a valuable option . In some countries, the use of home-grown feeds has gained interest because of their lower cost and wheat grain has been increasingly used in livestock rations. The wheat variety available for animal feeding depends on the region: hard red spring or winter wheats are generally used in North America while soft wheats are more common in Europe.

Due to very early selection of specific traits for bread or pastry making, wheat grains are highly variable in colour, form and starch types. Bread wheat grains are generally vitreous, whereas soft wheat grains are more opaque. Wheat grain is basically a source of energy in the form of carbohydrates (starch) enclosed in outer layers that form the bran. Unlike barley or oats, wheat grain is easily dehulled by threshing. Wheat grain is highly palatable and is a digestible source of nutrients for all classes of farm animals. However, like other carbohydrate-rich feeds, it must be fed with caution to ruminants and horses as it may cause digestive upsets.

Feed wheat is higher in protein than other common feed grains such as corn, barley, or oats. Varity of wheat available for animal feeding depends on the region. It can be fed whole or processed in many ways. It can be fed in association with other ingredient, or mixed and processed into pallets in concentrate feeds. Because of its feeding characteristics, levels of wheats in the ration should be limited.